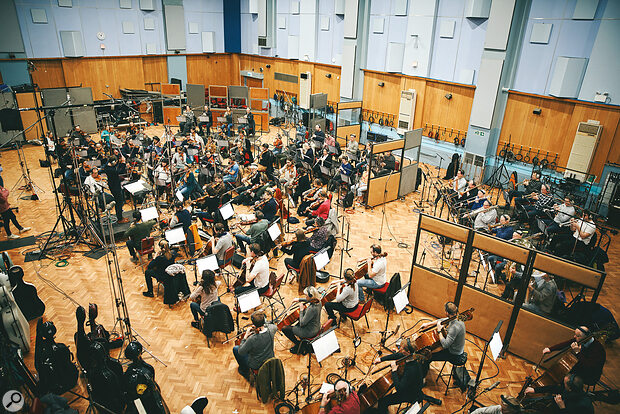 It seems to be an article of faith with Spitfire Audio that each new project has to be even more ambitious than the last. Less than a?year after releasing their massive BBC Symphony Orchestra, Spitfire’s team were back in a?major London studio frantically setting up mics for a?new large?scale sampling project. This time the recording location was the historic Abbey Road Studios, an iconic space which has generated an incessant stream of pop, classical and film soundtrack recordings since its conversion from a?Georgian townhouse in 1929.

Touted as ‘the world’s largest purpose?built recording studio’ and famed for its warm, clear and expansive acoustic, Abbey Road’s Studio 1 is 92 x 52 feet with a?40?foot ceiling, so can simultaneously accommodate a?110?piece orchestra and 100?piece choir (though if everyone wanted their own headphone mix, there’d be trouble). Over the years the studio has acquired a?stupendous collection of over 680 vintage and modern microphones, including a?pair of ultra?rare EMI RM?1B ribbon mics dating from 1949, which Spitfire give a?dedicated stereo channel in this collection.

Spitfire’s Paul Thomson explains: “Having worked there a?lot over the years, it was a?natural step for us to collaborate with Abbey Road Studios on creating new collections of instruments, one of which will be an enormously detailed professional modular orchestral library recorded in Studio 1. The concept was to create a?library that had bags of control and detail but also was incredibly simple to use, so that anyone can start using this classic film score sound in their?tracks.”

Named ‘Abbey Road One’ in honour of the fabled recording space, the first chapter of this new enterprise is the 60GB Orchestral Foundations core library, comprising strings, brass, woodwind and percussion ensembles recorded from 10 mic positions by four?time Grammy?winner Simon Rhodes. Featuring 91 of the top orchestral session players used by Spitfire in their previous collections, Abbey Road One: Orchestral Foundations utilises up to five dynamic layers and five round robins throughout and runs exclusively on its own dedicated plug?in, supplied free with the library. 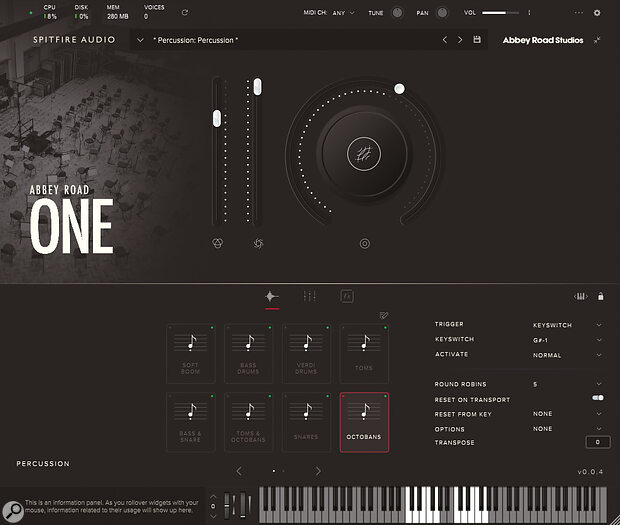 The dedicated Abbey Road One plug?in’s main page contains controls for volume and expression, a multi?purpose large control knob and an articulations switcher which shows up to eight artics at a time, with more available in a?secondary window.

When I?write string arrangements I?like to play with both hands in order to get an immediate impression of a?whole string section. This approach requires a?full, six?octave strings patch which combines violins, violas, cellos and basses in a?single playable unit. Unfortunately this library doesn’t have such a?thing, but I?was pleased to find that layering its high and low strings patches produces a?supremely playable full strings?combination.